Rheumatoid arthritis (RA) is a form of inflammatory arthritis and an autoimmune disease. In RA, for reasons no one fully understands, the immune system – which is designed to protect our health by attacking foreign cells such as viruses and bacteria – instead attacks the body’s own tissues, specifically the synovium, a thin membrane that lines the joints. As a result of the attack, fluid builds up in the joints, causing pain in the joints and inflammation that’s systemic – meaning it can occur throughout the body. Symptoms : Pain, morning stiffness, swelling, and systemic symptoms are common. Other rheumatoid symptoms include:

Investigations: Medical history A blood test may reveal an antibody called rheumatoid factor. This is an indicator of rheumatoid arthritis. X-rays can help show the progression of the disease. The American College of Rheumatology requires at least four of the following seven criteria to confirm the diagnosis: 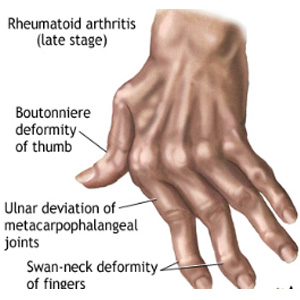